Worn after her separation/divorce it was seen in public several times before she died.

RARE PHOTO OF DIANA IN THE ONLY UNIFORM SHE EVER WORE.  RED CROSS UNIFORM AS PATRON OF THE BRITISH RED CROSS.  C. 1987 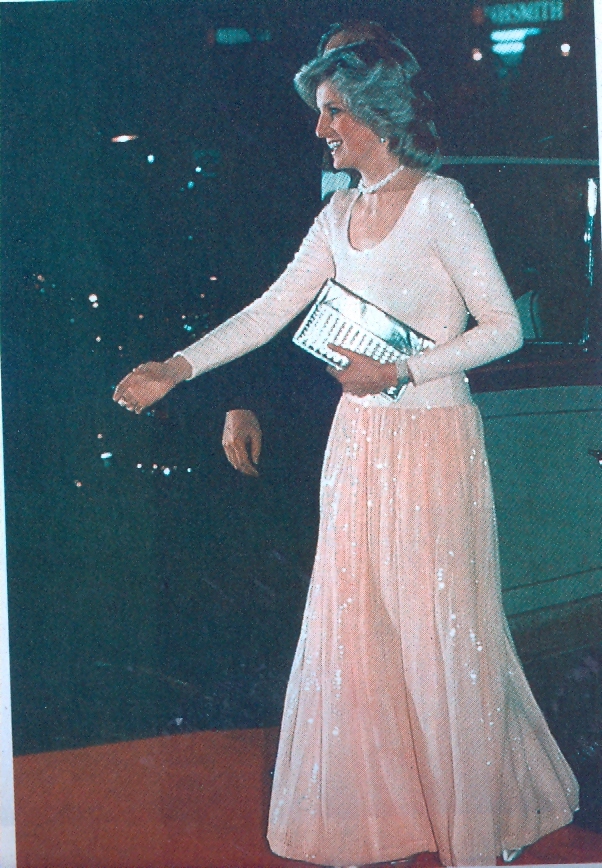 We have had this photo in our archives for some time.  Worn in London c. 1984 or perhaps later but we have lost the information on it.  Appears to be a coral sequinned gown with shimmer bodice.

WHILE its ladylike vibes may not exactly appeal to the modern and edgy IT girls of today, Lady Dior has nevertheless managed to find its way into their cool closets.

Sarah Jessica Parker was probably channelling her Carrie Bradshaw character when she was photographed in a woollen skullcap, sporty sunglasses and a classy, black lambskin Lady Dior.

Refreshingly fashionable, Barton and Parker’s quirky pairings of the utterly sophisticated bag has guaranteed the Lady Dior a cool comeback.

Launched in September 1995, the Lady Dior bag was given to the late Diana, Princess of Wales by former French First Lady Bernadette Chirac, on the occasion of her visit to the Cézanne exhibition at the Grand Palais in Paris, sponsored by the LVMH group.
The house of Dior’s latest creation was immediately adopted by the Princess, who ordered every available version and colour including a black crocodile, a pink ostrich and a black satin with diamante-studded charms.

In November 1995, during her visit to a children’s home in Birmingham, Diana was photographed by the international press with the bag, holding a child in her arms. That was the beginning of a success story for the coveted carrier.

A few weeks later, during a state visit to Argentina, she again appeared with her favourite bag leaving the official plane. The bag was from then on associated with the world’s most photographed woman. In 1996, as a homage to the Princess, it was renamed Lady Dior with her blessing.

Created in a couture spirit, the square, structured carrier in padded stitched leather reflects a number of the Dior house codes. The stitching pattern or cannage is inspired by the Napoléon III chairs once used by Christian Dior to welcome his elegant customers on the day of his runway show in 1947. The letters D.I.O.R. on charm pendants act as an eternal signature.