I was 10 years old when Lady Diana Spencer married the Prince of Wales. At the time, everyone seemed to be carried along on a wave of happiness and goodwill. However, after the wedding it just didn’t stop and the next 16 years would be quite a roller-coaster!  Diana’s star seemed to rise higher and higher, and now, looking back, just how a 20 year old girl managed to get through it all is beyond me. 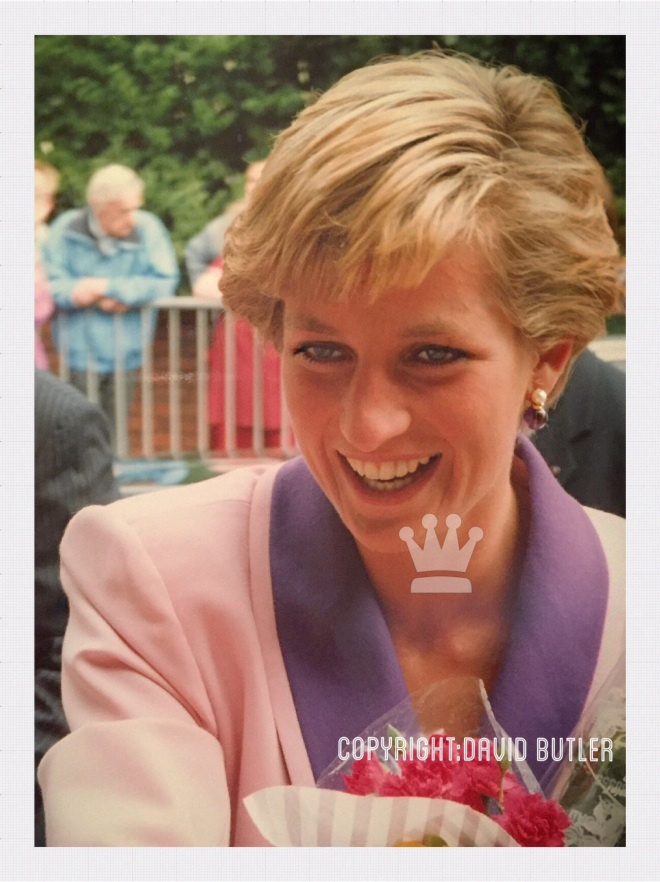 In 1982 the day before my 11th birthday Charles and Diana visited my home city of Leeds and my school organised a trip to see them. I’d built myself up having seen countless walkabouts on TV that I was actually going to meet Diana. Let’s just say I was very disappointed!!! Charles took off in a helicopter and Diana passed by in a car! 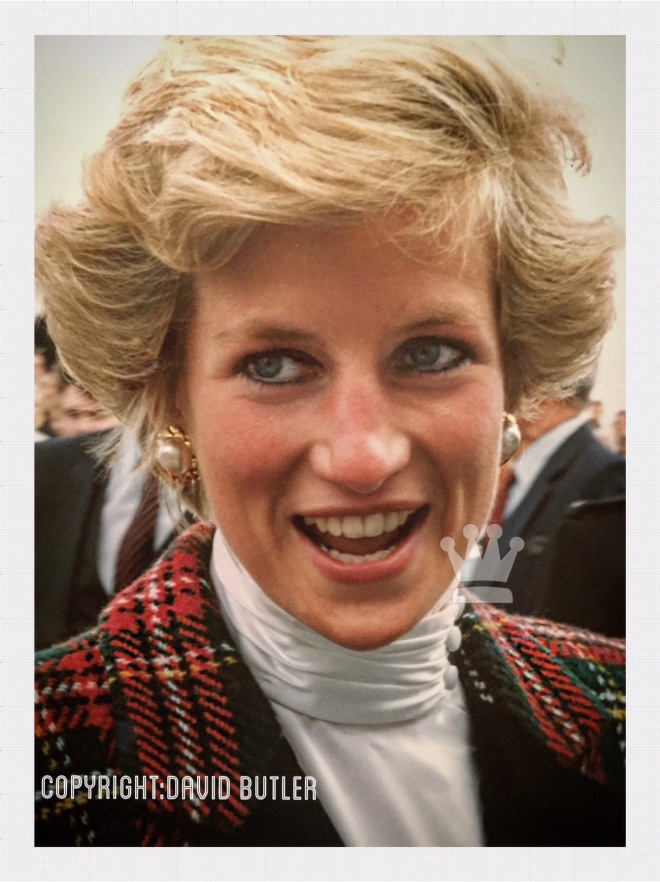 It wasn’t until 1985 that I actually got to meet and shake hands with Diana. She had just come back from a very successful tour of Italy and looking back this is one of my favourite periods. I’ve always loved taking photographs, so it was only natural that I should do this on royal visits.

In the early days, I would probably see Diana two or three times a year, this grew steadily as the years went by but still not to excess. I was choosy about which engagements to attend. Buckingham Palace was very helpful in those days and every six months would send me a list of all the engagements so I could pick and plan which ones I wanted to attend.

As time went on we gradually saw more of the real Diana, to a point where I’d say anything to her and neither of us would feel uncomfortable. She was very quick witted and loved to laugh and joke, clearly at her happiest with ordinary people on walkabouts. She would always come across to chat and I had quite a few amusing conversations with her over the years. 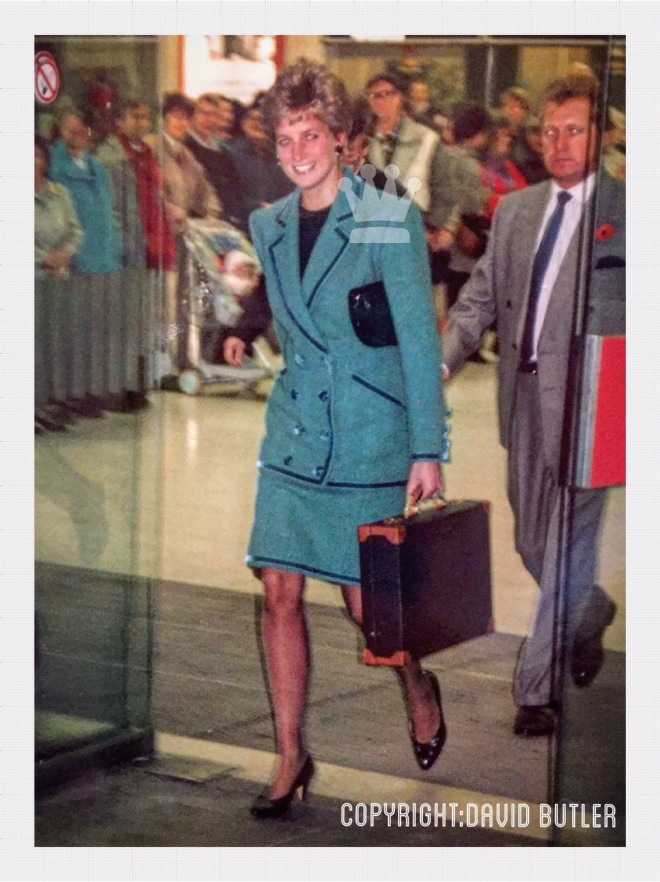 For example during the 90’s it was very fashionable to have hair highlights. I’d had some put in for the summer and when Diana saw me the first thing she said was:

“I see the hair has changed colour!”

I replied with flushed cheeks by saying:
”….and now the face has changed colour too!” 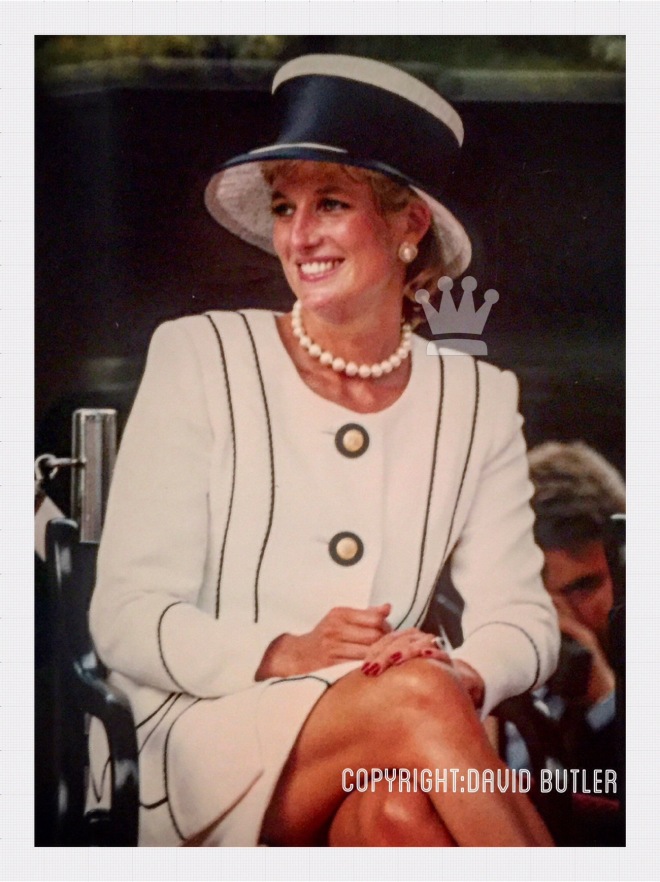 At the start of 1993 I asked Diana if she would consider visiting my home town that year as it was celebrating 100 years as a city. She said that she would see what she could do! A couple of months later whilst I was out in town I bumped into Diana’s personal detective Dave Sharpe. He was doing a recce for a visit the following month which apparently was ‘my fault’.

The visit turned out to be pretty memorable for me as Diana was accompanied by her sister who was acting as lady in waiting. Sarah was wearing one of her sister’s suits and I told the Princess that it was one I had wanted to see her in!

“You recognise it?” she said.

Despite my mock protests she insisted on calling Sarah over to tell her what I had said; there was much laughter and a giggling Diana moved on claiming I was trying to give her a hard time.

On another visit to Leeds I had just flown in from Paris and missed Diana going in, and to my horror she had done the walkabout on arrival too! As she left the line-up of dignitaries which led to her car meant she was getting further and further away.

But, as she said farewell to the Mayor she turned on her heel and came straight over saying she had wondered where I was? I told her about the trip and after commenting that I certainly get around she told me she was going to take the boys on a private trip the following month.

When the Princess visited St Marys hospital in April 1997 the Christies dress catalogue had just arrived. She was so pleased that she was able to help and said the sale would be a great boost for both cancer and Aids charities. She looked especially stunning in a grey Prince of Wales checked suit by John Galliano. 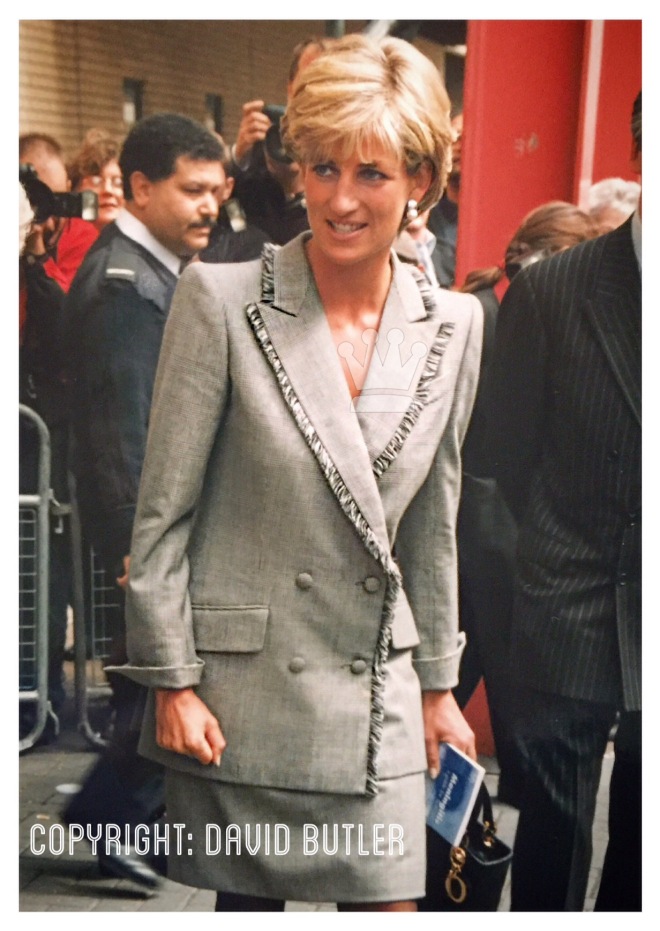 She had previously worn the jacket with trousers and that’s when I read who had designed the suit. I told her I loved her outfit and asked if it was by Galliano.

“How on earth do you know that?” she asked.

I then joked that the label was sticking out of her collar. She was about to feel for it when she realised the joke and gave me that wry smile.

The Christies sale was indeed a huge success and the London preview was to be the last time I chatted to Diana. She looked sensational in the ice blue shift dress by Catherine Walker. It was a great occasion and I was delighted to see so many of her fashion designers from over the years were there to help such a good cause.

Anne Beckwith-Smith – Diana’s first lady in waiting had returned to the fold, so it was just like old times. Diana came across and said how excited she was for the sale. We spoke on a topic and then my friend asked Diana if she would save the ice blue dress she was wearing for her.

The amusing thing is my friend was a totally different height and size than the Princess. I commented that she may need to have some extra panels drafted in much to everyone’s amusement.  As she walked back to her car I told her how stunning she looked, she turned around and smiled. That was the last time I saw her and I am so grateful that I made the relatively late decision to pop down to London for the engagement.

The next visit I had pencilled in was for the 3rd September but it was not to be. Instead I found myself in London along with thousands of others at the end of that week, there to say goodbye to someone who had achieved so much in really such a short space of time.

Perhaps the most touching story unfolded only after her death. I had given Diana a photograph in 1993 that I had taken of William at the Queen Mothers birthday as seen above.

It was only several years later that I saw a photograph of her desk as she had left it before departing for Paris.  Along with photographs by Lord Snowden and the esteemed royal photographer, Tim Graham, sat my photograph of William which she had taken home and framed.

***My special thanks to David for sharing this delightful story and photos with us!  We look forward to having you write for us again soon!***