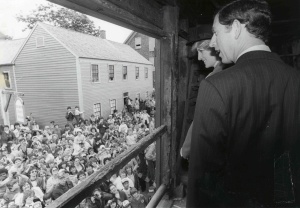 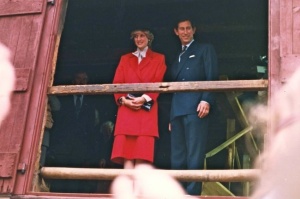 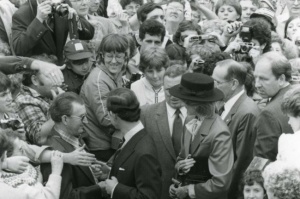 It was a magical day for many.

As part of an 18-day Royal Tour of Canada, the then young royal couple Charles and Diana arrived in Shelburne on June 16, 1983.

The visit came at a special time for the town. It was the bicentennial of the arrival of the first Empire Loyalists in Shelburne and everywhere people in period dress were recreating the scenes from 200 years earlier.

Finn Bower was the then relatively new curator of the Shelburne County Museum.

She said preparations for the royal visit began more than year before and involved many locals who worked to make the visit and the bicentennial celebrations something to remember.

Hours before the arrival of the royal couple, Bower saw hundreds of people begin lining up to get a good spot on Dock Street.

After much waiting, she said it was a magical sight as the Royal Yacht Britannia emerged out of a morning fog bank and entered Shelburne Harbour.

“It was absolutely gorgeous,” said Bower.

Bower was on a viewing stand with CBC commentators Jim Nunn and Leslie MacKinnon where she provided local and historical context to the visit to television viewers.

After arriving with a small armada of cars on the historic waterfront, the royal couple walked almost the entire length of Dock Street. They also signed the guest register at the museum and officially unveiled a plaque to open the J.C. Williams Dory Shop Museum.

At the museum, master dory builder Sydney Mahaney gave the couple a tour and offered a small replica of a dory as a gift for their then one-year-old son William.

Throughout the visit, the royal couple was charming … the then 23-year-old Princess Diana was stylish and graceful.

Bower never got to meet the Royal couple though.

Many others did, if briefly.

Milford Buchanan clearly remembers the throngs of people lining every available inch of space along Dock Street as they strained to see everything.

Charles and Diana were moving closer as they greeted people along the waterfront. As people jostled around to be able to see the royal couple, Buchanan, allowed his six-year-old son to move to the front of the crowd. He was promptly greeted by a smiling Prince Charles and they had a few seconds of conversation about comic book superheroes before he moved on greet the many hundreds still waiting.

It was a special day for many.

30 years later Bower can still vividly picture the Britannia leaving the harbour, slowly being swallowed by the fog as the Royal Marine Band on board played.

“You could still hear them, long after they disappeared,” said Bower. “It was wonderful.”